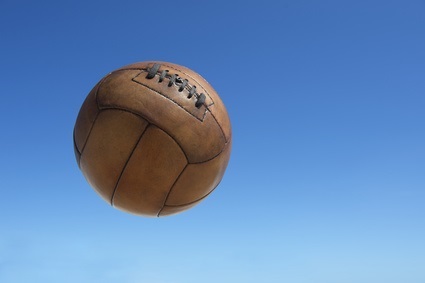 Variations of football have been played in the United Kingdom for hundreds of years yet the game has developed over time to become the game that is played today. The varied history of the sport has helped to make it as popular as it is today, all over the world but understanding the history of football in England can give a very interesting insight into the state of English football.

The Early History of Football in England

References to football can be found dating back over 800 years. Early forms of football were crude games where a “ball” was kicked between players and would most likely have been made of an inflated pig’s bladder.

It is believed that these games involved large amounts of contact and were liable to turn bloody during the course of the match. Historians have found references to deaths during medieval matches, including a reference to a death in Northumberland when a player accidentally ran into an opposing player’s dagger! One variation of play, known as camp-ball, actually allowed players to take part in on-field boxing matches with opposing players. Images which have been discovered from this period also seem to suggest that players were allowed to move the ball by any means necessary, including the hands. Historians believe that spectators used to gamble on the outcome of games, whilst noblemen tried to tax peasants who wished to play.

England was the first country in the world to develop a formally codified system of rules for football. Early attempts to codify the rules in the first half of the nineteenth century resulted in multiple different codes being created. It was only after the formation of the English Football Association in 1863 that the majority of teams in the country started to play under one set of rules. Some teams continued to play under the alternative Sheffield Rules system until 1878, whereas other teams splintered off and started to develop formal rugby rules instead.

A group of English men who were living in Paris during this period also introduced the formal English rules to France. Despite these rules, the football net was not invented until 1891.

Once the rules of football had been formally codified, ideas about strategy began to develop. Managers and players sought to exploit rules to their advantage, whilst using skills and creative tactics to baffle their opponents. Player roles started to become more entrenched and managers started to consider the formations which were being used. Professional play was still banned by the FA until the beginning of the twentieth century.

The Development of Football Competitions

The first FA Cup was played in 1871 and was won by Wanderers FC. The first formally recognised international competition was played in 1872 between England and Scotland. The English Football League was formed in 1888. This league consisted of 6 teams from Lancashire and 6 teams from the Midlands. No teams from London or the South participated. The League was won by Preston North End, who did not lose a single fixture.

A Second Division was added to the League in 1892. Both of these Leagues were expanded in 1898.

The League system continued to develop over the following years. The English FA now runs a range of different national and local leagues. It is possible for teams to move upwards and downwards through this league structure, depending on their successes and failures. The FA Cup allows hundreds of teams the opportunity to compete against each other in a knockout format, regardless of their normal league. The system means that small teams are occasionally able to knock larger teams out of the competition.

The professionalisation of football means that football is one of the most lucrative sports in the world. Both clubs and competitions are funded in part by corporate sponsorship, which enables multi-million pound deals to take place. Provisions have also been improved for spectators, following a number of serious accidents in stadiums.