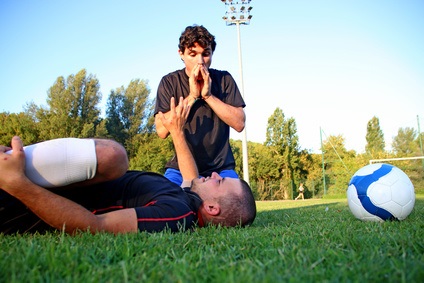 Every player must accept that there are some risks when they are playing football. Scratch, cuts, bruises and sprains are all possible during the course of a normal game of football. However, more serious injuries should really only occur if proper care is not taken. Nonetheless, football injuries can include broken bones, internal bleeding, paralysis and even death.

For footballers who are considering making a claim for compensation, it is important to be able to understand why an injury occurred. Understanding the sequence of events that led to an injury is an important part of the claims process. A qualified solicitor may be able to help to identify the party or parties that are liable for the injury. Although this may be clear cut in some cases, it may not be immediately obvious in others.

Injuries which occur during the course of the game often occur because of reckless or inappropriate conduct. Many of the rules of the game have been developed to protect players, so failing to abide by these rules can put other players at risk. In some circumstances, deliberately reckless play may be considered to be a criminal matter. Compensation may still be awarded in criminal cases, but it is possible that the perpetrators could also face criminal sanctions.

Other injuries may be caused by the conditions of the sports facilities. An uneven pitch or holes on the playing surface can become a serious trip hazard for players. Other potential hazards include the presence of foreign objects on the pitch, such as glass, stones or syringes. It is even possible for players and spectators to suffer chemical burns or other injuries if inappropriate chemicals are used on or left on the pitch. It is the responsibility of the owner of the ground to make sure that the area is safe for users.

Equipment manufacturers also bear responsibility towards their service users. Even items that seem as inconsequential as football boots or the football itself can cause injury if they do not meet the expected standard. For example, poorly made football boots can become a trip hazard or they may put unnecessary strain onto the player’s feet. Some claimants have been able to show that their feet and legs have been irreparably damaged due to poor quality boots that hurt their feet rather than protecting them. The manufacturers may be considered liable for any football injuries which are suffered in these circumstances.

The last major strand of liability is that which is associated with coaching and teaching of the sport. Inappropriate teaching methods can put people at risk of being injured. Putting additional strains on the body in this way can actually cause progressive damage which only manifests itself later in life. Liability can be difficult to prove in these cases, but it is possible to build a case if enough evidence is gathered.

Those who suspect that they have these types of injuries should contact a qualified solicitor as soon as possible, so that the solicitor can begin to gather evidence. Poor teaching practices can also put players in immediate danger.

If you have suffered any type of football injury that was not you fault, you may want to consider making a claim for compensation. It is often possible to speak to a qualified solicitor for free,  so that you can discuss your case and find out whether you may have a valid claim. The solicitor will listen to your story and then help you to ascertain what your claim could be worth.

If the claim is valid, they will help you to collect evidence that is pertinent to your case. Once enough evidence has been collected, they will notify the liable party that a claim is being made against them. The liable party will then have the opportunity to address your claim. They may settle, challenge or make a counteroffer.

For more information on football injury claims a good article can be found here. They also have a live chat if you have questions you need answering.