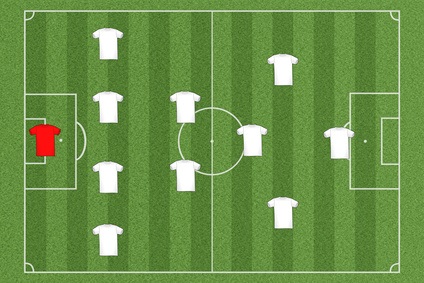 An adult football team will normally have up to 11 players on the pitch at any time. In rare circumstances, a team may start the match with fewer than 11 players; however a match will be forfeit if the team is unable to field at least 7 players.

One player will usually be designated as the goalkeeper and they are allowed to perform certain actions that other players are not allowed to perform. The outfield players are normally designated a position based on the manager’s chosen formation. These positions do not have special actions and it is easier for players to move from one position to another during the course of the match. However, players may need to be able to display certain skills if they want to be able to succeed in their role.

The most important role of the goalkeeper is to prevent the opposing team from getting the ball into the goal. This requires agility, vigilance, bravery and lightning-quick reactions. They must be ready at all times, as the action can move from one end of the pitch to the other in a few seconds. A keeper should be able to kick the ball accurately over long distances, because this will be required as part of a goal-kick.

They may handle the ball within their own penalty area; however there are some restrictions on when they can handle it. They may only handle the ball for six seconds and must not touch it with their hands again after it has been released, until the ball has been touched by another player. They cannot handle the ball if it is deliberately passed to them by a teammate.

Full-backs (left-back or right back)

A full-back helps to keep opposing players away from the goal by protecting against attacks from the wings. They must be able to tackle effectively and accurately every time, so that they win the ball without committing any fouls.

A full-back should also be able to cross and pass accurately so that they can help to get the ball up the field once it has been won from the opposing team. Full-backs must have a good working relationship with the goalkeeper, so that they are able to anticipate each other’s movements.

A central defender has a similar role and skillset to a full-back, but they must take charge of defending against attacks that are coming from the centre of the field. They may run between the right-back and the left-back to provide support where needed.

Some managers like to play a sweeper behind the main line of defence. Sweepers are more common in continental European sides than in English or Scottish teams. During the 1990 world cup in Italy there was a lot of discussion around Bobby Robsons use of the sweeper system which you can read more on here.

A sweeper must act as a penultimate barrier if an opposing player is able to break through the main defence. They should be vigilant to any threats and they should be quick on their feet. The presence of a sweeper can allow the defence to play further forward. They must be able to communicate effectively with both the goalkeeper and the defence.

A central midfielder must have high levels of stamina and their passes and crosses should be highly accurate. Central midfielders must be creative as they will help to create opportunities that strikers are able to convert. This can involve coming up with interesting plays that fool the opposing defence.

Wide midfielders take on similar roles to their central counterparts; however they help to give more width and shape to the team.

These players need speed and stamina to allow them to create plays from the wings. Wingers need to have great ball control skills and they should be able to pick out strikers accurately when they cross the ball. Wingers are often remembered for their brilliant goals that seem to curl into the net out of nowhere.

A striker’s main job is to get the ball into the back of the opposing team’s net. Fans will religiously scrutinise their conversion rate to make sure that they are changing chances into goals.

Great strikers have the right mixture of pace, strength and power. All strikers need to be accurate if they want to get as many shots on target as possible. Cunning and creativity allows strikers to break away from their markers when they need to, without wasting any energy when they don’t have to. Knowing when to keep the ball and when to pass the ball can also make or break a striker. A striker should be prepared to face a few hard challenges, as they will be regularly targeted by defenders.

Rather than playing two strikers, some managers prefer to have one striker up front and have a second person playing a behind the striker role. This player has more freedom and creativity to move between a striker and a midfielder role. These players should be able to produce bursts of speed which will allow them to move forwards to join the striker when they are needed.

An in-depth video going through each of the positions in football. Don’t worry about the presenters accent, it’s a good video.