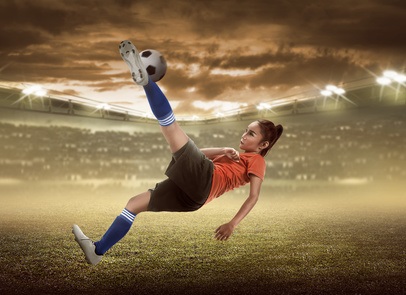 Understanding and Changing Public Attitudes about Gender and Sexuality

A recent survey of UK women has suggested that many women are still nervous about getting involved in sports that are widely considered to be “male sports”, because they are afraid of how they may be perceived.

Some women fear that taking part in sports will lead to them being perceived as unfeminine. Certain sections of society still believe that women only show reduced levels of femininity if they are not heterosexual. Fears about being labelled as homosexual also put some women off trying out sports like football. The fear of being labelled as a homosexual (“homo-negativism”) is a subtle form of homophobia which has been instilled in many people by the attitudes of society as a whole.

Breaking down misconceptions about gender roles and reducing homophobia in society can actually help to break down one of the main barriers towards female participation in football. Promoting strong female football role models from across the sexuality spectrum can help to show that sports stars do not fit into neat little boxes.

Sexism and Fears of Sexual Harassment

Fears of sexism and sexual harassment may prevent some women from enjoying football as a sport. In recent years, there have been a number of high-profile cases involving the sexual conduct of male football stars. Their attitude towards women is often shown to be problematic; however their attitudes continue to influence the behaviour of young male fans.

The problem has been further exacerbated by the attitudes and linguistic choices of some sports commentators and media personalities who comment on women’s football. Linguistic analysis of commentary over the past decade has shown that commentators are far more likely to discuss the physical and aesthetic appearance of women than they are to comment on the aesthetic appearance of male players. This helps to propagate the myth that women should be valued for their appearance rather than for their skills as football players.

Consistent sanctions for offenders and improvements in sports commentary can help women to feel safer and more valued as a member of a sports team.

At present, there are fewer female football teams than male sports teams, in part because of a lower uptake. However, this can create a vicious circle whereby fewer women join teams because there are no teams available in their locality. Teams should ensure that they promote themselves widely to make women aware of what is available to them.

The FAs website has a page that lets you search for clubs in your area and you can find that here.

Teams may also consider organising lift share schemes or transportation options to help women to get better access to the club. In addition to this, women should be given more information about how to set up a team or training sessions if there are none in the local area.

The majority of sports science research into football is focused on the effects of sports and supplements on the male body. A lack of research means that there are fewer products, services and facilities which are entirely dedicated to female footballers. This lack of tailored support acts as a barrier to some women, as they do not feel as prepared to tackle the rigors of a full training schedule.

There are very few physiotherapists in the United Kingdom who specialise is prevention and treatment of football injuries in female players. Physiological concerns also stretch to a lack of research and discussion about the relationship between sports and the menstrual cycle. In fact, the subject is still considered as a taboo by many people.

Many surveyed women state that they have concerns about how their menstrual cycle may affect them whilst they are playing sports. Wider discussion about football and the female physiology can help to make the subjects less taboo and should help to improve the support available to female footballers.