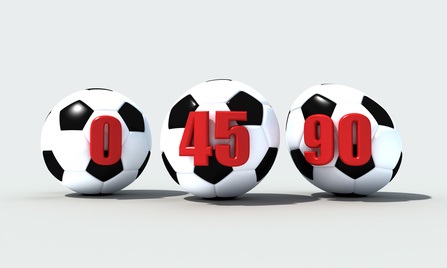 A traditional football match consists of two halves of 45 minutes each. There is a 15 minute break between the two halves of the match. Players come off of the pitch during this period, but what do they do during half-time?

The half-time routine of a team is normally dictated by the manager, so it is very difficult to give a one-size-fits-all answer to the question of what a football player should do during these 15 minutes. However, there are plenty of things to consider for those who want to make their half-time worthwhile.

The manager will normally want to speak to their team to give a mid-match analysis of their performance. Depending on their managerial style and the current state of play, this could end up being a real dressing-down or an uplifting battle cry. Whatever the score, the manager is likely to have some observations about both of the teams that are involved in the match.

The dressing room at half-time is the perfect place to talk tactics and consider the best ways to make the most of the second half. The manager and team officials can use this period to assess all of the players to see if they are all able to continue on into the next half. Substitutions can be made if necessary.

It is important that all players consider their nutrition during the half-time period.

This break is the perfect time to enjoy a drink and a snack to help to replenish some of the vital micronutrients which have been used up during the first half of the game.

Although orange segments are a half-time favourite for amateur players, oranges do not contain all of the electrolytes and vital nutrients which must be replaced before the second half begins.

Professional football players have actually confessed to eating some very unusual snacks at half-time, including fig rolls. These baked snacks are packed full of vitamins and minerals, as well as simple carbohydrates which are required for the slow release of energy during the second half of the match.

Bite-sized snacks are recommended because they allow players to take on nutrients without filling them up completely. Over-filling of the stomach before exercise can leave a player feeling sluggish and may even lead to gastrointestinal problems during the second half. The brain will also redirect energy and blood flow towards the stomach to try to digest a larger meal. Football players would not be able to spare this vital energy during a match.

Most players will also drink a sports drink which is packed full of essential ingredients. All Premier League football teams will have their own nutrition specialist who will have devised the perfect half-time recipe for success.

It can be difficult for players to balance the need to cool-down to aid recovery after an intense period of exercise with their need to keep their body at an ambient temperature so that they are ready for the next half.

Working out the correct strategy should involve taking into account the current climatic conditions. For example, if the game is taking place in a very warm environment, cooling-down will be a priority because the body will already be too warm to gain any advantage. In these circumstances, cooling-down will serve to bring the muscles back down to their optimal temperature to prevent the player from feeling the negative effects that are associated with overheating.

On the other hand, if the game is taking place in a cold climate, strategies should be put in place to prevent the body temperature from falling too far as this could impede second half performance.

During most games in England, the physiotherapy teams will adopt a cooling strategy when the players first come off of the pitch. Players may be given individual ice-packs to ease tired muscles. They may then do a miniature warm-up routine, including stretches and sprint practices, just before they are due to go back out onto the pitch.

When done correctly, a mixed strategy should help players to balance their body’s need to recover with the physical demands of being required to do another 45 minutes of intense exercise after the rest period is over.