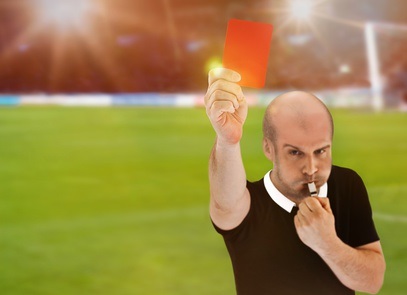 Despite the fact that they rarely get the credit that they deserve, the referee is one of the most important people on a football pitch. These people are often subject to abuse for “bad” decisions that they make, but they do not usually receive praise when they make a great choice during the course of the game. However, refereeing is still an enjoyable role for some people.

Even though formal matches should not take place without a qualified referee, the FA continues to struggle to recruit enough people to fill referee roles. If you are interested in becoming a football referee in England, you should get in contact with the FA to find out what training is available which you can do right now by visiting this page on The FA.com.

The Role of a Referee

The primary role of the referee is to enforce the Laws of the Game. The Laws of the Game consists of 17 basic laws which have been set out by FIFA. All referees must know and understand these laws before they referee a match.

Before the match, a referee must make sure that all player equipment and match equipment meets the required standards. They must also act as a timekeeper for the match. The referee has the discretion to postpone or abandon a match if necessary.

They should use their own discretion to allow players to receive adequate medical treatment when required. They should ensure that seriously injured players are removed from the field before play continues.

A referee should take appropriate disciplinary action against players who commit fouls. Referees may also take action against any team official who is not conducting themselves in a reasonable manner. The referee’s decision is final and should not be challenged by players or team officials.

After the match is over, the referee should provide the appropriate authorities with a written report covering any relevant information about the match. The report should include details of any disciplinary actions taken during the match and details of any incidents that occurred before, during or after the game.

A referee will normally work with 2 assistant referees (also known as linesmen). Some matches will include a fourth official.

The referee should brief their assistants before a match and debrief with them when the match is over. The referee may talk with his assistants during the course of the game; however the referee is expected to make the final decision on any disputed infractions. The referee can override any decision made by a linesman, although it is very unusual for this to happen.

Protection for the Referee

FIFA have introduced legislation which says that a referee cannot be held liable for any injuries or any damage to property that occurs as a result of their decisions. They are also protected from liability for any financial losses which may occur to a player or club as a result of a refereeing decision. FIFA believes that offering referees this type of protection should help to give clarity in decision making. If referees are less concerned about being sued for their decisions, they should be able to make decisions with impunity.

The Laws of the Game also seek to protect referees from players and team officials. Threatening the referee or any of the officials will lead to heavy sanctions for those who are involved.

When they are out on the pitch, referees and assistant referees often use gestures and hand signals to make themselves understood. This allows them to communicate over the roar of the crowd and to be understood when they are further away from the action. It also helps to overcome language barriers which may occur in an international football match.

If the referee wishes to caution a player, they will take out the appropriate coloured card and then hold it above their head with an outstretched arm. The referee will also note down the name and number of the player. If they are giving a player a red card for receiving two cautions in one match, they should show the yellow card first and then show the red card.

Assistant Referees use flags to help to signal decisions. If the ball leaves the field of play by crossing a side line, they will signal a throw-in by raising their flag in the attacking direction of the team that will be given the throw.

To signal to the referee that a manager wishes to make a substitution, the assistant referee will hold the flag above their head with both hands.

The official holds out the flag in front of themselves to represent offside. The height of the flag helps to signal to the referee which player was caught in an offside position.

A concise video on football referees is below. It applies to US soccer but also around the world.